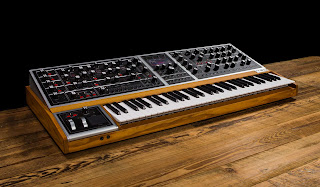 Long story ahead...
TL;DR version: The Moog One is officially released and working on it has been the culmination of a long journey for me personally. Check out the videos and sound samples.
.
.
.
.
I met Bob Moog only once. It was the early 2000s and he was giving a presentation at UNCA, where I was a student in the music department.
At the time, all my experience with synthesizers had either been with sample-based keyboards or with the newly popular virtual emulations that ran on standalone digital synths or, increasingly, as software instruments.
I had never played an analog synthesizer and didn’t have much interest in it. They seemed expensive and not nearly as flexible as software. But most confounding to me was the fact that all of the analog synthesizers I was aware of at the time were monophonic, including the one Moog Music had just released, the Voyager. Why anybody would want a keyboard instrument that could only play one note at a time was beyond me.
So, presented with a once-in-a-lifetime opportunity to meet a genius inventor, what did this clueless 20-something do? I asked about his instrument’s biggest limitation.
“Dr. Moog, why do your instruments only play one note at a time?” I asked.
He seemed slightly annoyed but was gracious about it and answered that they “use entirely analog circuitry. To make it polyphonic would be very expensive and it would be huge.”
Not entirely satisfied with his answer I resumed my skepticism for a few more years. Sadly, Dr. Moog passed away soon after our encounter.
It wasn’t until I took an electronic composition class with Dr. Wayne Joseph Kirby (“Doc”) that I finally got it. I was giving my usual spiel about how I didn’t see the value of analog circuitry for making music. So Doc proposed a side-by-side comparison.
The next class we had a “shoot out” between my digital Virus C and his original Minimoog from the 70s. The Virus is packed with modulation routings and onboard effects (and of course is polyphonic). But Doc had us strip everything down to just the oscillators and the filter. And there was no question about it, the sound of the Minimoog blew the Virus out of the water. It wasn’t even close.
I would go on to experiment in the newly created Moog Lab, playing the Voyager and Minifooger effects that Bob Moog donated to the college. I recorded most of my third album, Symbignosis, there. I fell in love with the instruments. And soon I found myself working at Moog Music, first as a theremin tuner (yes that’s a real job), and before long as a calibrator on the Voyager line.
I left for a while but came back in 2016. I now own a Voyager and a Model D, as well as many other pieces of Moog gear. I’d been calibrating the reissued Model D up until this past summer, when I had the honor to work on Moog’s most ambitious project yet.
It was something I had heard whispers of for years, but the team developing it had kept it under tight wraps. By the time I had returned to the company it at least had a code name: the LAS (Long awaited synth).
When we began production, the whole backside of the factory was veiled behind massive black draperies. I had the honor of being the first calibrator to work on it, which meant being one of the first people outside of the engineering department to actually play one.
And it is a gorgeous instrument. It’s like everything that my beloved Virus could offer, but with true Moog sound. It’s fully polyphonic and entirely analog up to the effect section. It has tons of modulation options and a beautiful suite of digital effects including Eventide reverbs, (which are known as being some of the best in the industry). The Fatar keyboard is absolutely a delight to play, with highly expressive aftertouch.
The user interface is beautifully streamlined and intuitive. Nearly every function has a knob and it’s incredibly simple to route modulation from any source to any target. It has tons of ins and outs including assignable control voltages and both mic and line inputs to process audio.
And the thing sounds absolutely glorious. Don’t take my word for it: check out the sound samples at the Moog website.
And Dr. Moog‘s predictions were true: it is very big and expensive. But considering everything that it does I think it’s well worth it, even if it’s more of an aspiration than something immediately accessible to a lot of us.
The Moog One is a work of art, an instrument designed for serious musicians or for studios who want to offer the very best to their clients.
I can’t say enough about the folks at Moog who made this happen. The engineers there are some of the best in the business, and the effort they put into making this dream a reality was monumental. It’s been a great privilege to work with some of them closely these past several months.
So here it is: the Moog One. It has been a long journey for many of us. And a new flagship as the company moves forward into the future.
Posted by Unknown at 12:28 PM No comments: