My Journey with the Moog Voyager 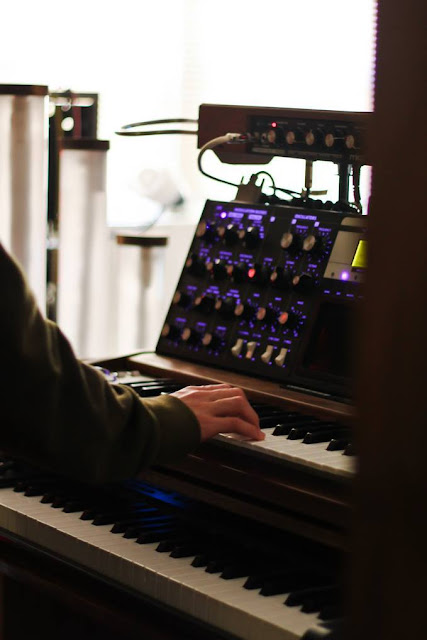 In the world of synthesizers, there are toys, there are tools, and then there is a third category, which I would call instruments. These don’t come around often. They aren’t just a box full of sounds and presets to be used. These are the kind of instruments that invite the player to a dialogue, that inspire and inform the music as a participant, not as an empty device to be used. Such a synthesizer is more like a piano or a fine violin than the kind of keyboards that have become all-too-common (and all-too-cheap) on the shelves of corporate music chains. I have only really known one such instrument, personally, and that is the Moog Voyager.

So I was saddened to hear this recently that Moog Music has discontinued the Voyager line, putting an end to the last instrument that Bob Moog designed from start to finish. Granted, the Voyager lived a long life for a production unit, surpassing the lifespan of its predecessor, the Minimoog by a couple of years. Still, it feels like the end of an era, and a significant moment in my own life and relationship with analog synthesizers.

Unlike many Moog users, I am not old enough to feel childhoold nostalgia for analog synthesizers. The synths of my childhood were shiny, plastic, digital machines that played back complex sampled sounds stored to ROM. This was the kind of keyboard I first heard in the mid 80s, when an elementary school music teacher brought a digital keyboard to class, and my mind was blown by the sudden possibility of instruments that could make any sound imaginable.

After some early Casio synths, that would more properly be called toys, my first “real” synthesizer was a Korg X5D.
Though you could layer the various sampled sounds loaded into its memory in different ways, and you could alter the effects, the soundset of the X5D was limited. Still, it provided a useful toolset for a budding musician. I loved it. I attached a MiniDisc recorder to it with velcro and had my first primitive electronic music production rig. I took this setup with me to Australia in 1999, when I spent a year at a school of meditation.

This proved to be a pivotal experience for me in several ways. As soon as I arrived, the school’s founder and teacher, Samuel Sagan, presented me with a unique opportunity in the form of an internship recording and editing audio for the school’s correspondence courses. But he also gave me a very important set of tools: a personal computer, an 88-key digital piano, and a much nicer Korg module. He must have known what he was doing, because he laughed as he was bringing the gear up to my room and said, “I’ve learned that the way to convince someone they need a tool is to give it to them for a while and then take it away.”

Indeed, after a year of using a computer and synth module to make music, I was convinced that this was what I needed. I recorded my first album there, and while it was a primitive affair, it sparked an interest in recording and digital audio production.

My next synth would be an Access Virus C, which I still use to this day. This became my main staple, along with Reason, which was the first software I had encountered that provided a level of sound quality on a par with hardware instruments. The Virus is a beast of a machine. It was the first real tool I had used that provided flexibility and hands-on control in a way that really allowed for improvisational control of timbre. This virtual analog machine uses modeling technology to mimic analog circuitry. It is entirely digital, but at that point I didn’t know the difference. That is, to say, until I got to compare it side by side with a Minimoog.

Though I had dropped out years before, I returned to college after my time in Australia, to pursue a music degree, armed with a newfound passion for electronic music. My school only offered degrees in music performance or audio engineering, so I decided to hobble together the studies I needed by basically completing both programs, as well as every synthesis class they offered. My last semester, I took a class in analog synthesis.

Bob Moog had actually taught at my school, and though he had recently passed away, he had bequeathed to the university a room full of analog gear, including several Moogerfooger pedals, a theremin, and one of his newest inventions, the Minimoog Voyager.
Before I played one, I didn’t get it. To me, digital sounded pure and rich, and infinitely more versatile than older technologies. And anyway, most music would inevitably get mixed down to CD’s or MP3’s, so what was the value in using analog gear, I reasoned.
In class, I even made the boastful claim that my Virus, with its digital effects, polyphony, and elaborate modulation options was superior to an analog synthesizer. My teacher, Wayne Kirby, decided to put that notion to the test.

One day, he had me bring in the Virus, and he brought in his own Minimoog. We stripped both down to their most basic sound: a square wave with no filtering, no modulation, and no effects. The sound difference was incredible. It wasn’t even close. Without all the bells and whistles that came with the Virus, its basic sound was hollow and flat compared to the richness of the Minimoog. I was convinced, and I began experimenting at length in the Moog Lab.

Immediately, I found the Voyager to be responsive and inspiring in a whole different way. It was hard to describe the way it changed the experience of music making. Everything that came out of it was rich and complex and felt like experiencing synthesis for the first time. And there was a sense of immediacy about it that was different from a digital emulation. When I turned a knob, I wasn’t telling a computer to play a different sound: I was literally changing the sound. The experience was different in a way that was intangible, yet undeniable.

Later, I would go on to work at Moog Music for several years, calibrating Voyagers. I got to know them intimately, to see the incredible attention to detail that went into them, and to respect the build quality, which surpassed anything I had encountered before. Eventually, I saved enough to buy my own, a beautiful walnut unit with purple backlighting, blacklight LED’s, and mod wheel lights that sync to the LFO. It has become my primary musical instrument.

So I was thinking about all of this personal history when I learned the other day that the Voyager was coming to an end. I had been working on a new piece of music for a while, the last song on my forthcoming album. I had hit a wall with it, and was unsure how to move forward.
When I read the press release from Moog, I knew what I wanted to do: play the Voyager. It usually lives in my live performance rig, which I call the PsybOrg (I actually built an elaborate electronic “pipe organ” around the Voyager). But I took it down, set it up next to my mixing desk and began to play.

I sent an arpeggiator to it from the computer, added a touch of delay, and began tweaking. I synced Oscilator 2 and played with its pitch knob. I tweaked the cutoff and the pitch of Oscilator 3. I varied the resonance. And the Voyager gave birth to a rich, droning, otherworldly tone. And suddenly, the whole piece opened up. It went from being a frustrating exercise in stumped creativity to one of my favorite musical moments in the whole album. That is what the Voyager does. It brings musicality and breaths new life into the music.

I will always be grateful for the genius of Bob Moog and the other engineers, programmers, and designers who contributed to this fabulous instrument. I have the honor to know some of them personally and I know they put a great deal of love and vision into their work. Were it not for their efforts, I might never have come to know the depths of what synthesis could mean to me. I look forward to seeing where they take this voyage next.